To share your memory on the wall of Nathaniel Kennedy, sign in using one of the following options:

Provide comfort for the family of Nathaniel Kennedy with a meaningful gesture of sympathy.

Nathaniel was preceded in death by his mother, father, siblings (Dorothy and Alvin), and son Nathan. He leaves behind his brother, and sister (Rovenner and Benjamin). Also, he leaves behind his daughter Natalie, son-in-law Ernest Jones, daughter-in-law Lucia Martinez-Davis, four granddaughters Kayla, Ariana, Autumn, Ava, numerous family, and friends. We give thanks to Jerry, Debbie, Jackie, members of Identity Crisis Band, and family who cared and treated my father as family while he lived in Pennsylvania.

Nathaniel’s daughter would like everyone to know that her father always viewed life in a positive way. If we could learn one thing from him, it’s that he viewed people as humans regardless of their race or differences. We are to love one another and treat all people no different than what we would like to be treated. Let’s keep his legacy going!
Read Less

We encourage you to share your most beloved memories of Nathaniel here, so that the family and other loved ones can always see it. You can upload cherished photographs, or share your favorite stories, and can even comment on those shared by others.

Joseph Del Valle Sr. and Will & Sherry Krause have sent flowers to the family of Nathaniel "Lefty" Kennedy.
Show you care by sending flowers

Posted May 11, 2019 at 02:24pm
Nat was in Our Band "Yesterday Band" in the Poconos. He sang some Motown Songs and as being a Drummer myself I was able to Tap off the Energy he gave into each Song. I broke a drumhead one time and by the next Practice Session he gave me one of his and still am using it and will always keep it in my Yesterday Band Memorobelia. We have a Show coming up in August and in my Heart I will be playing it for Him. "Rock-n-Roll Heaven", Righteous Brothers is the Best Song Ever Composed.
Comment Share
Share via:
JS

Posted May 10, 2019 at 09:52am
I will always be grateful to you for being a father to my children when I wasn't there for them. I couldn't thank you enough. God Bless your soul.

Posted May 08, 2019 at 06:40pm
I will always remember the good times, the sound of your voice and your beautiful personality. May heaven be your stage now my friend.

Will & Sherry Krause purchased flowers for the family of Nathaniel Kennedy. Send Flowers

Posted May 08, 2019 at 11:26am
Dear Nat Dear Friend Love Joe and Donna Ladore Our Thoughts and prayers are with you and your family

Flowers were purchased for the family of Nathaniel Kennedy. Send Flowers

I just found out the News yesterday. This is my Uncle whom taught me everything I know about drumming. I am so sorry I did not get this information sooner. I just got back in town last night found out from my brother that my uncle pass away. I will miss you Lefty, R.I.P. Uncle Lefty, You will be missed . 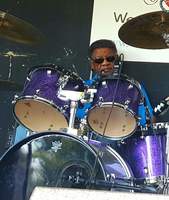 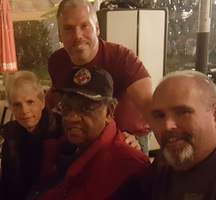 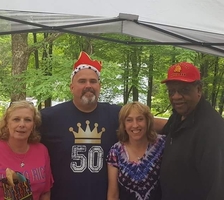