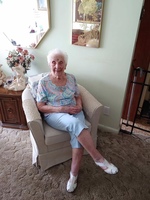 Family and faith meant everything to Margaret. She adored her parents, Virginia and Emiddio Ingenito, who immigrated to New York from Italy and taught her the value of close family. Known as the caregiver in her family, she looked after her five siblings: Joseph, Angelina, Frank, Johnny and Al; she lived by her sister’s side for much of her life. In 1939, she married Daniel Servedio, who predeceased her. She and Daniel had one son, Dominick Servedio, who was the center of her life. She treated her sister’s daughters as her own children, cooking and sewing for them and even attending their parent teacher conferences at school. She was also very close to her son’s wife, Patricia, always claiming that Pat was a daughter, not a daughter-in-law, to her. Her two grandchildren, Dominique and Daniel, were the “apples of her eye.” Margaret was guided by her strong faith in God. She attended mass regularly and was an integral part of her church community.

Margaret was creative, smart, independent, and feisty. She was also a talented cook. She could draw a crowd to her table with her wit and famous dishes, including her unmatched “gravy”, chicken cacciatore, candied sweet potatoes, sausage bread, onion pie, and macaroni pie. Many will miss the thrill of walking into her apartment to be greeted by the aroma of her cooking and having the honor of dunking a piece of Italian bread in the bubbling sauce. She loved to teach her secret recipes to her devoted “God-Granddaughter,” Jacqueline. And, even after 100 years, she could gather her five great grandchildren, Connor, Harrison, Pierce, Oliver and Jack, around a table to assemble a graham cracker pudding pie together.

Margaret’s personality was magnetic, her energy was infectious, and her impact was far-reaching. When her granddaughter asked her the secret to her longevity at her 100th birthday, Margaret advised to:

Margaret is survived by her son and daughter-in-law, Dominick and Patricia Servedio, her two grandchildren, Dominique and Daniel, their spouses David and Jennifer, and her five great-grandchildren, Connor, Harrison, Pierce, Oliver and Jack.

In lieu of flowers and in honor of Margaret’s love for her daughter-in-law, Patricia, please consider a donation to The Michael J. Fox Foundation for Parkinson’s Research: https://www.michaeljfox.org/

All rights reserved. This obituary is also archived at obittree.com